Karen O’Leary Englebart, a Junior League volunteer, visits to the Rosalie Rendu Center after almost 20 years have passed. She reflects below on how much the Center has grown and dimensionalized with so many lives inspired and transformed.

Almost twenty years ago, Carrie DuBois and I attended a baby shower for a resident of the Carriage Manor apartments.

It was a rainy day. The courtyard was flooded and the apartments were cold. But there was a sense of joy in the air as the women from diverse communities celebrated the mother to be and the new life to come.

Women in the Junior League had recently joined Sister T as volunteers in support of her mission to break the cycle of poverty in her beloved community of brave, hard-working, Spanish-speaking immigrants.

Since the baby shower, years ago, there has been a great deal of new life and changes in every realm. On my recent visit I found Carriage Manor was transformed. No longer neglected by an absentee landlord, it’s now beautifully appointed, landscaped and maintained. No more danger of floods and mud when it rains.

The Daughters of Charity had rescued Carriage Manor from the very real threat of being torn down. A Silicon Valley developer had bid millions of dollars for the property with plans to dispense with the apartments and low-income tenants and transform it into a high-rent business district.

Daunting as it was, the bid was no match for Sister T and Carrie DuBois’ dreams for the Carriage Manor residents. They created the audacious goal of protecting the property by mobilizing investors of their own. The Daughters of Charity saved the day.

Now the residents are protected and cared for on an even deeper level. In supporting Sister T’s vision of helping the residents prosper, the Daughters of Charity keep the rents low and affordable and also provide scholarships to St. Elizabeth of Seton, a gateway to the finest private and public high schools including Sacred Heart, Menlo and Woodside Priory.

Families are not just breaking out of poverty. They’re beginning to thrive because of the generous and imaginative support from high-caliber foundations, top-of-the-line private and public educators, generous individual donors and brilliant, devoted volunteers who are helping children to receive the best education available.

Bill Somerville, of Philanthropic Ventures Foundation, caught Sister T’s vision early. He’s become integrally involved with the adult ESL students by providing funds. Other foundations, throughout the years, have provided community-building and educational opportunities for families. The volunteers, including retired professors and grad students, tirelessly mentor, tutor, guide and befriend the students. The benefit is not easy to measure, but it’s safe to say they’re radically affecting the lives of the RRC students.

The ESL Classes and the staff have expanded significantly over the years. Maria Lozano, a full time teacher, is dearly loved. Students are devoted and thoroughly engaged in the class. Biographies about inspiring figures – Rosa Parks, Helen Keller, Anne Frank – broaden their education in history as they learn English.

The students also relish the chance to refine their English in the Conversation Club. Learning and speaking English at RRC has led some students to become politically and professionally active in their communities. They feel confident in their intelligence and skills and are eager to improve their communities. In one case, it means going to San Jose State to become a social worker.

Three students have become translators and bridges between teachers and families as Parent Involvement Workers. Bill Somerville developed the program based on their skills and abilities and the pressing need in the school district for English speaking teachers and Spanish speaking parents to understand one another’s issues, so young students can stay on track in school.

Years and years ago, when Sister T fell in love with the community who resides at Carriage Manor Apartments, her vision was to break the cycle of poverty in this little corner of the world. The Rosalie Rendu Center reflects her vision. She wants the best for them – the best education, meaningful work, homes of their own.

Sister T is convinced that the only way the cycle of poverty will be broken is if all the relevant communities work together in life-enhancing ways. It’s happening. Diverse groups working together are changing the worlds of families – generation after generation — and they’ve become mutual admiration communities in the process. 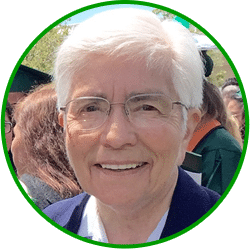 Sister Trinitas, warmly known as Sister T at the Rosalie Rendu Center, shares her reflections of teaching English as a Second Language (ESL) classes in the East Palo Alto community. Sister T and her team have been offering free, specialized ESL classes for over 15 years in a traditionally underserved neighborhood in the Bay Area. Hundreds of families have benefited from the resources at the Center, and Sister T continues to deliver on the promise to combat poverty through education.

Where seeds are planted